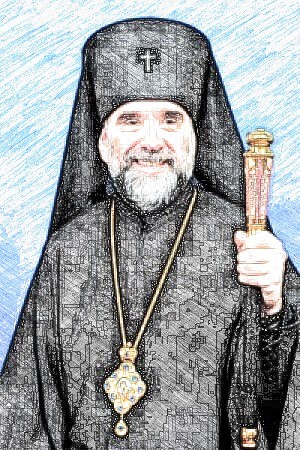 The son of Ann (Rosics) and the late Peter Dahulich, Bishop MICHAEL was born in Johnson City, N.Y., on August 29, 1950. He grew up in Binghamton, N.Y., and has one brother, retired US Air Force Captain George Dahulich, who presently works for Lockheed Martin and lives in Centreville, Va.; and a sister, Barbara Knighton, who lives in Binghamton and works as a secretary at the State University of New York at Binghamton.

He was baptized in the Orthodox Faith as an infant at St. Michael’s Church in Binghamton, where his parents had been married in 1948. His father was a convert from the Byzantine Catholic Church, while his mother was cradle Orthodox. Michael’s mother, together with her parents, nurtured him in the Faith by their example, and his mother read to him Bible stories and the lives of the Saints from his earliest childhood.

From the age of ten until Michael graduated from college and went to Seminary, he served as an altar boy under the tutelage of his pastor, Fr. Stephen Dutko, who was the inspiration for his vocation. At the age of 14, praying before the Icon of the Theotokos on the Feast of her Dormition, he pledged himself to serve the Holy Church in whatever capacity God would direct him, asking the protection and guidance of the Holy Mother.

He attended Binghamton Central High School in 1967. His senior paper was a biography of Ecumenical Patriarch ATHENAGORAS. He graduated two years later from Broome Community College, and set out to pursue his dream to serve the Church by attending Christ the Saviour Seminary in Johnstown. He completed his theological studies there in December of 1972, having been privileged to be mentored by His Grace, Bishop JOHN of Nyssa.

While a student at the Seminary, he met Deborah Sandak, a parishioner of Christ the Saviour Cathedral in Johnstown. They were engaged on the Feast of the Protection of the Theotokos in 1972 and were married on January 21, 1973 in the Johnstown Cathedral.

He was ordained by Bishop John, first to the Diaconate on February 3, 1973, in St. Peter the Apostle Chapel in Johnstown; and then to the Holy Priesthood the following day, in Christ the Saviour Cathedral.

Father Michael assumed his first parish assignment at SS. Peter and Paul Church in Homer City, Pa., a small mission community which had never had a full time priest, on Sunday, February 18, 1973. Two days later, en route to dinner at his best friend’s home in Jenners, Pa., he and his wife were in a car accident; she was killed instantly, and he was hospitalized for three months. He struggled for a long time afterward with her loss.

In June of 1973, he returned to serve the Homer City parish, while living at Christ the Saviour Seminary. His wife’s death had had a profound effect on the young priest, and after months of spiritual struggle, Bishop John decided it best for him to pursue further studies, reasoning that he “did best in the classroom.” His Grace applied for Fr. Michael’s admission, provided him with a vehicle for commuting, and funded his education personally. Bishop Michael has never forgotten his mentor’s generosity, and has striven to provide scholarships for his students to this day in memory of what was given to him.

Upon his graduation from St. Vincent College, he was named Prefect of Student Life at Christ the Saviour Seminary, a position he held for five years, until SS. Peter and Paul Church achieved parish status, and Father Michael became its first full-time pastor. He was also assigned as instructor of Ethics at the Seminary, where he also taught Scripture and Homiletics, until he was transferred from the area in 1985. During his Ph.D. studies at Duquesne, he was also adjunct lecturer, teaching Scripture and Eastern Orthodoxy in the Theology Department at the university.

For nearly 13 years, Father Michael served SS. Peter and Paul Church. He was privileged to see it grow from 60 to more than 130 members, and from mission to parish status. The physical facilities of the parish grew during Fr. Michael’s tenure there as well: the church building was brick-encased, its interior was decorated, and a rectory was built.

During that time, Fr. Michael also served as Religious Education Director for the Johnstown Deanery and as Associate Editor of The Church Messenger. In 1982, he was elevated to the rank of Archpriest, and named Vice-Chancellor of the Diocese. In addition, until Bishop John’s untimely death in 1984, Father Michael was privileged to serve as His Grace’s personal secretary.

He continued as Vice-Chancellor and Secretary to Bishop NICHOLAS of Amissos, until December of 1985, when he was transferred to Holy Ghost Church in Phoenixville, Pa., where he served as pastor for 16 years. During that time, the parish grew from 256 to nearly 450 members, including more than 100 children. Several improvements in the temple and the 20-acre facility were successfully undertaken, and more than half a million dollars was raised toward the building of a new educational facility. A pre-school and day care was established, with the intent to grow into an Orthodox school.

During that time, Father Michael was also named to the Study and Planning Commission and the Ecumenical Commission of SCOBA. He served for more than a decade as the Dean of the Mid-Atlantic Deanery parishes of the Carpatho-Russian Diocese, and Vice-Chairman of the Harvest 2000 Committee on Missions, Evangelization and Diocesan Growth. He also edited the Diocesan Prayerbook, Come To Me.

He was especially honored in 1998 to be named Protopresbyter by the Ecumenical Patriarchate, and elevated to that rank by His Eminence, Metropolitan Nicholas of Amissos, in his parish in Phoenixville.

In 1993, Father Michael was asked by His Eminence, Archbishop HERMAN, to teach at St. Tikhon’s Seminary, where he has served on the faculty to this day. In 2001, he was released from the Carpatho-Russian Diocese to the Orthodox Church in America, and came to serve full-time at St. Tikhon’s Seminary, first as Administrative Dean (2001-2002) and then as Dean (2002-present). His field of expertise in teaching is New Testament, and he has also taught Old Testament courses, Homiletics, Pastoral Theology, and Ethics at St. Tikhon’s.

During the past nine years, God has blessed St. Tikhon’s by more than doubling its enrollment. Father Michael was privileged to be a part of the team that earned national accreditation for the Seminary from the Association of Theological Schools in the United States and Canada. He helped work on a revision of the curriculum for the Master of Divinity program, and has served as Editor of the Tikhonaire; The Spirit of St. Tikhon’s; By the Waters; and St. Tikhon’s Theological Journal. He also works as director of recruitment, development and fund-raising at the school.

Bishop Michael has tried to bring to the Office of Dean a pastoral sensibility borne out of 28 years of parish ministry. He believes that the Lord has commanded clergy to do two very important things: to make disciples of all nations (Matthew 28), and to assist those in need (Matthew 25). He has sought to recruit into the Seminary men who share that vision and to promote that vision beyond Ordination through the Seminary’s efforts in continuing education for clergy.

His goal has been for every student to be able to study for the priesthood without having to worry about financial concerns. The two top priorities of his Deanship toward that end have been scholarships for deserving students and assistance for married students and their families.

Additionally, Bishop Michael has published a number of articles in theological journals, magazines and newspapers. He has had a recurring column in The Orthodox Herald on “Sobornost.” He has presented several papers, delivered numerous talks, lectures, and keynote addresses, and led many seminars and retreats in schools and parishes throughout the country, as well as teaching week-long seminars in Scripture in both Brazil and India.

Bishop-Elect Michael was tonsured as a Riasophor Monk on October 23, 2009 at St. Tikhon’s Monastery Church by Metropolitan JONAH. He was then tonsured into the Lesser Schema at the Monastery Church on Holy Tuesday, March 30, 2010, by His Beatitude. The following day he was elevated to the rank of Archimandrite and awarded the mitre by the Metropolitan.

Bishop Michael’s philosophy of life is taken from St. Paul the Apostle: to do his best to fight the good fight, and to run the race of salvation, by working as hard as he can, as fast as he can, for as long as he can, until the Lord calls him to pass the baton on to someone else (II Timothy 4).