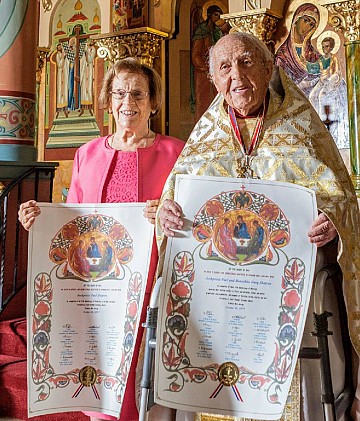 Archpriest Paul Shafran celebrated his 70th anniversary of ordination to the Holy Priesthood (28 December), and he and Matushka Mary celebrated their 70th wedding anniversary (27 November).  On 28 October at Saint Vladimir Church in Trenton NJ, where Father Paul had served as Rector for 55 years and is now a retired “Pastor Emeritus," a Jubilee Celebration was held in their honor including a joyous Divine Liturgy followed by a festive testimonial banquet.

Archpriest Joseph Lickwar (Diocesan Chancellor) presided at the liturgy joined by Father Volodymyr Chaikivskiy (Parish Rector), Father Paul Shafran, and several visiting clergy from within and outside the diocese.

Archbishop Michael had planned to attend, but an unexpected Archpastoral obligation arose.

Father Joseph presented Father Paul and Matushka Mary with beautiful Gramotas (honorary certificates of appreciation) on behalf of the Holy Synod of Bishops of the Orthodox Church in America recognizing their dedicated and exemplary service to the Orthodox Church and their long-standing marriage. He also read letters from Archbishop Michael praising the couple’s many decades of faithful ministry and marriage. Joining in the celebration were members of the couple’s extended family, parishioners, and other guests.

Congratulations and “Many Years!”

on reaching these remarkable milestones! 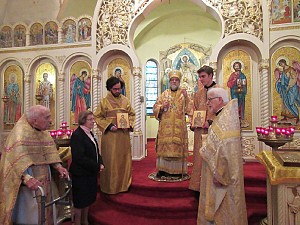