For the third year, the faithful and friends of Holy Apostles Orthodox Mission Church in Lansing NY blessed the waters of Cayuga Lake during the Theophany season. On Saturday, 11 January 2014, 16 hearty people made the trek to the lakeside and joined their voices in joyous prayer to God to bless the largest of the magnificent Finger Lakes. A bonfire was lighted on the point at Myers Park, but the weather was marvelous, reaching nearly 50 degrees during the service.

There was a bit of rain in the air but it held off for the festivities. Flanked by altar servers and faithful, Father James Worthington (rector) celebrated the prayers of the Great Blessing of Water under a temporary canopy. Toward the end of the service, a procession walked to the water's edge. A beautiful ice cross, inlaid with petals of roses, was tossed into the lake (guided by the seagulls who were in attendance).

One of the college students, Greg, was ready to make good on his promise to retrieve a cross from the lake. Donning a shirt proclaiming his faith and shorts more suitable for warmer weather, he went into the lake and waited for the brass cross to be thrown. It landed some feet from him, and he made an admirable dive to pluck it from the frozen depths. Then he ran quickly to the shore, where he received a special blessing. The gathered assembly then went to the fire to warm-up and partake of the treats that were served -- hot coffee, hot chocolate, donuts and other tasty delights.

It was a beautiful and blessed day. The faithful look forward to next year, when several other brave souls may also claim they endured the frigid depths to raise the Cross in honor of the baptism of Jesus Christ. 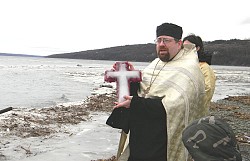