The weekend of 29-30 August was inspirational and memorable for the Orthodox faithful of Saints Peter & Paul Church in Bayonne NJ marked by the Archpastoral visit of His Eminence, Archbishop Michael. It was a time to gather in prayerful gratitude for the many blessings God bestows on the parish, and to celebrate the joyous event of Father Sophrony Royer’s 25th Anniversary of ordination to the Holy Priesthood.

Archbishop Michael celebrated Great Vespers on Saturday evening and Divine Liturgy on Sunday morning. Archpriest Sophrony Royer (parish rector), as well as  faithful from the parish and other local Orthodox communities in the vicinity, greeted His Eminence. Concelebrating the Divine Liturgy with Archbishop Michael were: Archpriest Sophrony, Archpriest John Fencik (of neighboring Saint Mary’s Carpatho-Russian Church), and Archdeacon Michael Suvak. Sub-deacon Mark Federoff assisted along with Sub-deacon Philip Benda and Reader Stephen Wasilewski (Parish Council President). At the conclusion of Hierarchical Divine Liturgy, His Eminence presented Father Sophrony with a diocesan Gramota (honorary certificate) for his 25 years of service to the Holy Priesthood and also presented him with a Palitza (liturgical sword) with the image of the Theotokos on it.

A celebratory luncheon was held at the Knights of Columbus as parishioners, guests, friends, and the family of Father Sophrony heard many speeches and words of thanks in honor of his faithful and dedicated service to Christ and His Holy Church. Present were: Archbishop Michael, Archpriest Joseph Lickwar (Chancellor, Diocese of New York & New Jersey), Archpriest Gary Breton (Dean,  New Jersey Deanery), and Archpriest John Fencik. 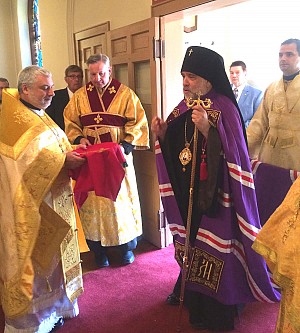