On the Sunday of the Veneration of the Cross (3 April 2016), Archbishop Michael celebrated the Divine Liturgy in the Chapel of the Transfiguration on the campus of Princeton University. Before the Liturgy began, His Eminence blessed a gift from the Orthodox Christian Fellowship [OCF] and chapel members -- a specially designed circular rug (“Orlets”/Eagle) on which a bishop stands during services as a sign of his pastoral leadership over a particular geographic location. This rug was designed specifically for Archbishop Michael as the presiding hierarch of the Diocese of New York and New Jersey. Rather than the typical Byzantine eagle, the rug features an American bald eagle, the nation’s symbol, carrying an olive branch, above a grouping of various churches of the diocese and the Empire State Building and the new Freedom Tower in New York City, the Archbishop’s official See. The outer rings depict waves of the bodies of water, such as the Hudson River, and bridges connecting the two states and three deaneries. The requisite protecting walls of the Orlets depict the Wall of Honor at Ellis Island, the entry point to America for many of our Orthodox ancestors.

During the Liturgy, the faithful venerated a special Cross-shaped reliquary containing a small wood fragment of Christ’s true Cross. The chapel also venerates this Cross during Holy Week and at the Feast of the Elevation of the Cross on 14 September.

At the conclusion of Liturgy, His Eminence presented special awards to active and faithful members of Princeton’s OCF. These awards honor the memory and legacy of the University’s first Orthodox Chaplain, Father John Turkevich, also remembered as a renowned Professor of Chemistry. The service ended with the singing of “Many Years!” for various constituencies, including a number of birthdays and saints commemorated that week. The celebration ended with a beautifully catered Lenten reception. 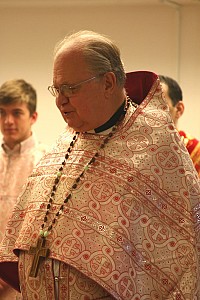