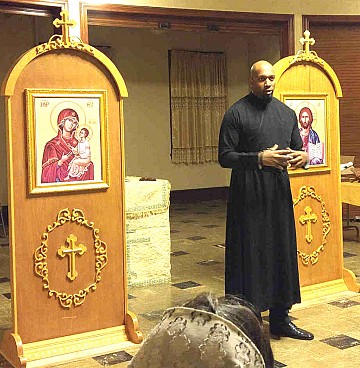 Reader Samuel Davis of the newly formed Saint Simon of Cyrene Orthodox Mission in New Brunswick NJ writes: “It is with great joy that I can greet you, on behalf of our Mission community. More than that, I would like to extend a welcome to you to join us in prayer whenever you are in the New Brunswick area for services. The Mission is a community dedicated to building up the Holy Orthodox Church in an area that has yet to be exposed to our faith. This is a monumental task! At present the laborers are few, having just started out, but with God’s grace and mercy we will grow and truly become a proper witness to the One, Holy, Catholic, and Apostolic Church on the ‘Western Shore.’”

“In the fall of 2013 I was received into the Coptic Orthodox Church through the mystery of baptism. My three children were first to submit ourselves to the Coptic Church; my wife would convert two years later. Putting aside my family’s Reformed Theology and worship practice was something that I did not struggle with; rather, it was the emotional tie of parting ways with men and women I served with in the ministry, primarily my father who was also the pastor of the community. It was expected of me to one day lead his communion of churches and I had to now tell him and his staff that this would not be happening.”

“For a season this  caused emotional grief and separation between my father and I. Family members and friends did not  understand what or why I made chose to leave the faith I was not only raised in but also spread myself through preaching and church planting. There was no greater joy than to know I was now a part of the one true Church of the Apostles. I was introduced to the Orthodox Faith like my other Charismatics through the preaching of Mar Enoch (formerly Veron Ashe, a Pentecostal preacher), of the Mar Thoma Church. Although I had been exposed to great charismatic preachers who inspired Mar Enoch like Archbishop Wilbert McKinley and Evangelist Jackie McCullough, it was not his style or meter of preaching that caught my attention, but his command of the Church Fathers that caused me to privately ask myself: ‘Was I truly experiencing the fullness of the Church?’”

“This drove me to reading the Fathers and about half way through of reading the letters of Ignatius I knew if I read any further I could no longer claim any allegiance to Reformed Theology. Something absolutely real was happening and it was as if God had reached into my heart and began to change how I saw Him and His Church.”

“After being received into the Coptic Orthodox Church like many converts I was filled with zeal and wanted to serve the Church as best as possible. With the blessing of our then bishop, Anba David, I began a homeless outreach in the city of New Brunswick called Saint Simon of Cyrene Mission with  three other college students. Once a week we would go out and distribute food and clothing to the local homeless community. The Lord gave His blessing and this quickly became four days a week of service. In a subsequent meeting with our priest and bishop I made a request to plant Saint Simon of Cyrene as a mission station to reach Americans with the Gospel. This may sound odd to many because the city of New Brunswick is filled with churches but the city had not had an Orthodox voice for thirty years. That small Orthodox chapel that was planted to meet the needs of Orthodox college student is now the home of four different Pentecostal groups. I was personally touched by the testimony of Haile Sellassie who said, “The American Negro would not need a Civil Rights Movement had he known the faith of his fathers (Orthodoxy)” With that HIM sent clergy to the West to share the rich wealth of the Orthodox Faith with Africans in the diaspora of the West.”

“Our bishop, Anba Karas gave his blessing for this effort to be planted in the city of New Brunswick. Sadly the Oriental Orthodox Churches are not fully prepared to share and embrace Americans of any kind. Having been under persecution in their home land, Copts are focused on the preservation of the culture and language and that gives little way for evangelism. With that, sadly, Saint Simon’s did not have a home. Frustrated I began to look for a new home for our growing mission. It was during this time that Father Jonathan Ivanoff, who I had initially met via Facebook, reached out to me and asked if I had considered the OCA a new home for Saint Simon of Cyrene Orthodox Mission. Now, having been formed in the Oriental rite I was a bit reluctant at first to take up his offer, but over time, through many phone calls, FB chats and meetings in NYC, we began to grow a new relationship and my interest began to peak. We scheduled a time for us to meet with Archbishop Michael to set a plan to making this reception happen.”

“I was still it bit burned by our last experience and shared with my wife on the way to the city that I was having second thoughts and may not follow through with this plan. Archbishop Michael was an incredible bishop who laid out his entire plan in detail on what he wanted to see happen with our mission. Hearing his heart and desire to reaffirm Holy Orthodoxy to those whose ancestors were once at the foundation of our faith touched me. That evening we all decided the OCA was the home for Saint Simon of Cyrene Orthodox Mission!”

“And so, on Saturday, December 17, 2016, our mission of about 20 adults and children was officially established and received into the Diocese by Archbishop Michael. I was tonsured a Reader and our remaining catechumens were baptized and chrismated. Our first services were held the weekend of January 7-8, 2017; we will now hold weekly Reader Vespers (Saturday evening) and Sunday morning Reader Service (Obednitsa), every weekend, and will continue an active ministry of service and evangelism to the people of the New Brunswick area.”

“I cannot thank our Lord enough for the hospitality and love we have experienced having been received into the Orthodox Church of America: SS Peter & Paul parish in  Manville NJ that has continued to be a great Mother Parish to us; the direction of Archbishop Michael, Fathers Jonathan Ivanoff, Gary Breton, Timothy Hojnicki, James Parsells, Eric Tosi, and Victor Gorodenchuk have all been an incredible blessing to our mission and my family.”

“I ask you all to sincerely keep us in your daily prayers that the work of our great God and Savior Jesus Christ be accomplished not only here but throughout the world.” 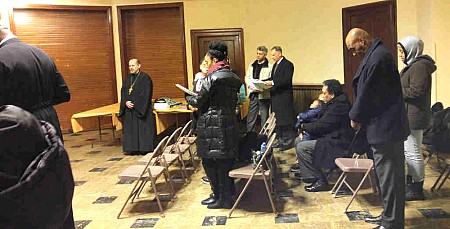