As in years past, Orthodox Christian hierarchs, seminarians, clergy, and faithful from around the country participated in the annual "March For Life." While in the nation’s capital, Metropolitan Tikhon attended the Vigil at the National Shrine of the Immaculate Conception.

Other hierarchs  of the Orthodox Church in America participating in the march included our own Archbishop Michael, along with Archbishop Nathaniel and Archbishop Melchisedek. Other Orthodox hierarch in attendance were: Bishop Maxim of the Serbian Orthodox Church, Bishop John of the Antiochian Orthodox Christian Archdiocese of North America, and Bishop Dimitrios of the Greek Orthodox Metropolis of Chicago. “Gathering together in a peaceful way to give voice and raise awareness to the sorrowful effects of abortion and its legalization is very important,” said Priest Andrew Bartek (Rector, Saint Panteleimon Church, Summit IL). 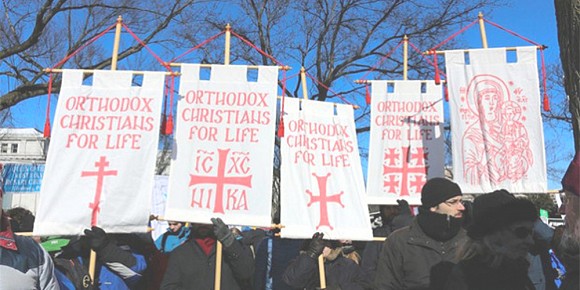