Archbishop Michael presided at the Diocesan Cathedral's patronal feast of the Protection of the Holy Virgin on the weekend of 30 Sept - 1 Oct 2017. In conjunction with the liturgical observance, a new external marquee was dedicated. The 150 year-old building, built in 1867, was purchased by the “Metropolia," which became the OCA, in 1943 and was its Pro-Cathedral until 1982.  The new marquee was designed by Archimandrite Christopher (Calin) and crafted by Melinni Brothers in Florence, Italy.

The marquee was donated in memory of Olga Sawchuk Dorochovich by her family on the occasion of the 100th anniversary of her birth and the 4th anniversary of her repose. Olga was a faithful parishioner of the Cathedral, served as Church School coordinator, choir member and Secretary of the Parish Council for decades. A festive luncheon followed the dedication. 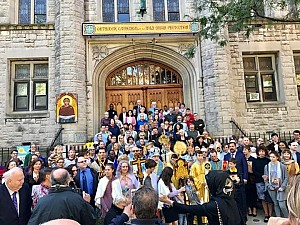