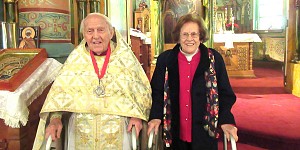 Archpriest Paul Shafran, Pastor Emeritus at Saint Vladimir Church in Trenton NJ celebrated his 71st Anniversary of Ordination to the Holy Priesthood on 28 December 2018. Father Paul and Matushka Mary also recently marked their 71st wedding anniversary (November 27th). Following the liturgy on 30 December the congregation sang "Many Years" for both of them. Matushka had been in a rehab facility for a few months following surgery for a broken leg, but returned home just in time for Christmas. She and Father Paul are truly grateful for everyone's prayers. "Many Years" and warmest congratulations to them on the occasions of their remarkable anniversary milestones!