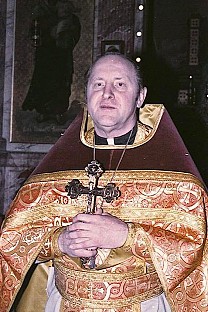 The Deepest Sympathies of the clergy and faithful of the Diocese are expressed to the family of the newly-departed + Archpriest John Bohush. + Father John fell asleep in the Lord early this morning, Friday, January 21.

Born on August 10, 1934, in Endicott, NY, to the late John H. and Anna (Chura) Bohush, Father John was a graduate of Union Endicott High School in Endicott. He was a graduate of Wilkes College, Wilkes-Barre, PA, and Saint Tikhon’s Orthodox Theological Seminary, Class of 1957, where he was mentored by Saint Nikolai Velimirovic of South Canaan and Zicha.

During his senior year of seminary, John met Mary-Ann Benyo at Saint Tikhon’s Monastery. They were married on March 2, 1957, at Saint Nicholas Russian Orthodox Church in Wilkes-Barre, PA.

After seminary Father John considered whether to pursue a career as a professional baseball player or take another path. He took a secular job for Ozalid, a Division of GAF in Illinois. In 1957, Father John was ordained a deacon at Holy Trinity Cathedral in Chicago, IL by Archbishop John of Chicago and Minneapolis of blessed memory. On September 27, 1958, Father John was ordained to the Holy Priesthood at Holy Virgin Protection Cathedral in New York City, by Bishop Andrei of the Bulgarian Church who filled in for the ill Metropolitan Leonty.

Father John was also the Boy Scout leader for his three sons, all three of whom were Eagle scouts and recipients of the Alpha Omega Award. In 1969, Father John served as a Captain in the United States Air Force. He was first stationed at Chanute Air Force Base in Rantoul, IL and then assigned to Kadena Air Force Base in Okinawa, Japan. Matushka and the boys followed Fr. John when he was sent to serve his country in Japan. In 1976 he received an honorable discharge and came to serve at the Philadelphia parish.

The schedule of services for Father John is as follows:

Services will be held at Saint Vladimir Orthodox Church, 812 Grand Street, Trenton, NJ 08610. His Eminence Archbishop Michael will be presiding with visiting clergy.

Flowers and donations in memory of Father John may be sent to Saint Vladimir Orthodox Church, Trenton, NJ.

Grant rest eternal in blessed repose with the Saints, O Lord, to the soul of Thy newly-departed servant, the ever-to-be-remembered + Archpriest John, who has fallen asleep in the Lord; and make his memory to be eternal! "Vechnaya Pamyat!"