Saint Basil's Orthodox Church in Watervliet (Maplewood) NY celebrated its feast-day, in commemoration of Saint Basil the Great, on Friday, 1 January 2016. On Thursday evening, December 31st, Vespers with Litiya (a fervent prayer including a blessing of breads).  On the following day (Friday) the Divine Liturgy of Saint Basil the Great was celebrated by his Eminence, Archbishop Michael, as the faithful of Saint Basil's parish commemorated their patronal saint. The concurrence of the civil New Year on 1 January made the celebrations additionally prayerful in thanksgiving for blessings past and those anticipated in the year ahead by the grace of God.

The traditional blessing of “Saint Basil Bread” (Vasilopita) was performed by His Eminence. The bread was then distributed to all parishioners at the conclusion of the service. Parishioner Robert Palmer received the bread piece which contained the coin of Saint Basil and, according to popular custom and tradition, received a special blessing for the coming year. After the completion of the services on both days, a luncheon for all present was served at the Saint Basil’s Church Center. Archbishop Michael visited with the children the following Sunday, leading a Church School class attended by children and their parents.

Responses to the services were sung by the Saint Basil’s parish choir under the direction of Choirmaster, Reader Michael Mellin. 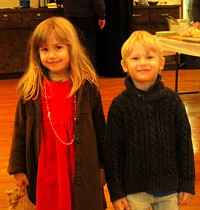