Sunday of Orthodoxy
ARCHBISHOP MICHAEL, METROPOLITAN JOSEPH AND THEIR FLOCKS

On the “Sunday of Orthodoxy” (March 20th), His Eminence, Archbishop Michael hosted His Eminence, Metropolitan Joseph of the Antiochian Orthodox Christian Archdiocese of North America for the Divine Liturgy at Saints Peter & Paul Orthodox Church in South River NJ. The two hierarchs concelebrated with seven priests, among them Father Joseph Lickwar (Chancellor, Diocese of New York & New Jersey) and Father David Garretson (Rector, Saints Peter & Paul Church). They were joined by Archdeacon Michael Suvak. Metropolitan Joseph preached the homily. The responses were sung by the parish choir under the direction of Basil Kozak.

After the morning Liturgy, Metropolitan Joseph and Father Thomas Zain (Vicar-General of the Antiochian Archdiocese) gave a presentation on the situation of Syrian refugees and the continuing war in Syria.

That evening, Metropolitan Joseph presided at the Vespers for the “Sunday of Orthodoxy” joined by Archbishop Michael and more than forty priests and deacons at Brooklyn's Saint Nicholas Cathedral. The homily was delivered by Archbishop Michael. Numerous faithful representing various jurisdictions from throughout the greater New York City area attended the Sunday evening service. A Byzantine choir led by Protopsaltis Rassem El Massih, together with the "Spirit of Orthodoxy" Pan-Orthodox Choir co-directed by Professor Aleksei Shipovalnikov and Protopsaltis Stratos Mandalakis, shared in the responses to the Vespers service.

A delicious Lenten meal was served after Vespers by the faithful of Saint Nicholas Cathedral. The evening culminated in joyous fellowship of hierarchs, clergy and faithful. 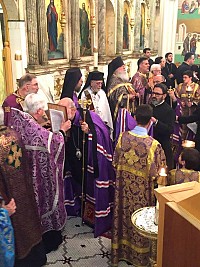 COMMEMORATION OF THE SUNDAY OF ORTHODOXY