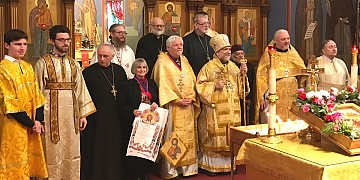 We extend our prayerful best wishes to Archpriest Joseph and Matushka Charlotte Woodill on Father Joseph's retirement from active parish ministry at Saint Nicholas Church in Whitestone NY, and the Diocese of New York and New Jersey, for health reasons, effective 1 January 2017 following his last Sunday service in the parish, at which he was honored by his loving community of faithful.

On 26 December 2016, Archbishop Michael and Deanery clergy served the Feast of the Synaxis of the Theotokos with Father Joseph at Saint Nicholas Church. At the conclusion of the Liturgy, Archbishop Michael presented a Gramota on behalf of the Holy Synod of Bishops (Orthodox Church in America) to Father Joseph for his exemplary service of 37 years in the Holy Priesthood. Father and Matushka Charlotte also received the Saint Innocent Medal from Archbishop Michael on behalf of His Beatitude, Metropolitan Tikhon, in recognition of their service to the Orthodox Church in America and to both Saint Tikhon's and Saint Vladimir’s Seminaries. Following the Liturgy there was a fellowship hour with the parishioners of Saint Nicholas Church; then, the Archbishop and Deanery clergy and their wives took Father and Matushka to a farewell luncheon.

Father and Matushka have moved to Virginia to live with their son and his family.  His Eminence and all the clergy and faithful of the Diocese pray that God will grant them His choicest blessings as they enter this new season of their life together.

Grant, O Lord, a prosperous and peaceful life, good health, salvation, visitation, and good hasting in all things, unto Thy servants, the Archpriest Joseph and Matushka Charlotte, and protect and preserve them for many blessed years!  "Mnogaya Lyeta!"