On Sunday, 24 September 2017, Saints Peter & Paul Church in Jersey City NJ celebrated its 110th Parish Anniversary. The celebration mirrored what was done 110 years earlier by its immigrant faithful as Marius Anghel greeted Archbishop Michael, saying, “Seventeen years ago my family and I immigrated to America; now I am an adult. By the grace of God and prayers and lives of Saints Peter and Paul, I welcome you on behalf of our parish.”

During the Hierarchical Liturgy, His Eminence awarded the “Kamilavka” to Priest Nikolai Gulin and awarded the parish a Synodal Grammota (Certificate of Appreciation), which was received by Archpriest Joseph Lickwar (parish rector and Chancellor of the Diocese of New York & New Jersey).

Archpriest Daniel Skvir, former choir director of the parish and son of Father John Skvir, among his reminisces particularly noted the parish’s history of commendable choir directors of whom the present director, Aleksei V. Shipovalnikov is ranked.

The commemorative luncheon was hosted in the church’s lower level amid a display of historic photos from 1908 until now. A commemorative book with a most extensive history of the parish was distributed and included a congratulatory letter from Protopresbyter Daniel Hubiak, former Chancellor of Orthodox Church in America and who served four years as rector of the Jersey City Parish. He was unable to attend and wrote, “Under the direction of the Mitred Archpriest John Skvir, its priest for thirty-five years, the parish supported our seminaries, hosted visiting hierarchs and representatives of other Autocephalous Orthodox Churches, and accepted all decisions of our All-American Church Councils.”

His Eminence commented at the luncheon of his particular fondness for the parish, which had hosted his consecration in 2010. He stated the parish is known for “honoring the memory of the beloved founders and beautifiers of the parish, both clergy and faithful, and their incredible legacy of 110 years of love and Orthodox Christian witness:  this vibrant parish and this beautiful church temple.” 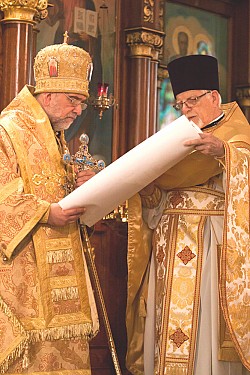