Anniversary and Blessing of Church Hall

On Sunday, 5 August 2018, Archbishop Michael visited Saint John the Baptist Church in Rochester NY. During the visit, His Eminence presented a Synodal Gramota (certificate of appreciation) and an honorary palitza (priest’s vestment) to the parish rector, Archpriest Ken James Stavrevsky, on the commemoration of the 40th anniversary of his ordination to the Holy Priesthood. Following the Liturgy, the newly renovated Church Hall was officially opened and blessed by Archbishop Michael. 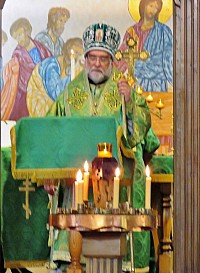