Aid for Suffering Christians in Syria 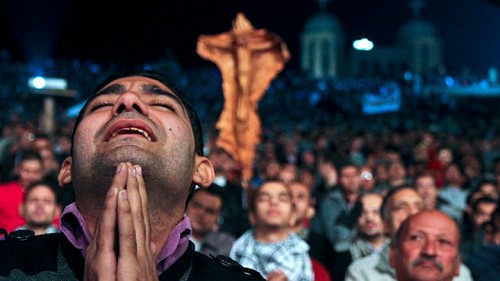 Saint John the Baptist Church in Rochester NY has raised $5,846 to help victims of the Syrian Civil War through the Syrian Relief Fund of International Orthodox Christian Charities (IOCC). Thanks to the generosity of parishioners, visitors, and community members, these funds will help IOCC to provide food, shelter, sanitation, and spiritual support to Syrian Christians victimized by war and terrorism. When taking into account the many matching grants IOCC receives, this gift may have a multiplier effect of well over $40,000 when fully utilized by IOCC! Since the beginning of the Syrian Civil War in 2011, millions have been forced from their homes into crowded refugee camps or have fled to neighboring countries to escape the fighting, while many thousands of others have been murdered, kidnapped, or enslaved by terror groups like ISIS who specifically target religious minority groups including Christians. Earlier this year, the United States formally declared ISIS’ persecution of Syrian and Iraqi Christians to be a genocide.

For many months now, our parishes have been seeking ways to help our persecuted brothers and sisters. In addition to offering regular prayers for the Christians in the Middle East facing daily acts of violence and terror, the Church has opened avenues for us to help tend to the physical needs of these victims as well. International Orthodox Christian Charities, the global charitable arm of the Orthodox Church, is working directly with the Antiochian Patriarchate in Damascus and has thus far distributed food, clothing, school supplies, medicine, and other life necessities to nearly three million refugees. As one of the most well-respected charities, IOCC and its partnership with the Antiochian Patriarchate have allowed the organization to send aid into some of the regions hardest hit by the war.

Giving through IOCC is completely secure. Managed directly by the Orthodox Church, IOCC is a top-rated charity and allocates on average 92 cents of every dollar directly to its aid programs. IOCC works directly through the Church, and donors can have peace of mind knowing that none of the resources it provides to those in need can end up in the wrong hands. In addition to monetary gifts, IOCC has also requested parishes to put together simple Emergency Kits with basic school or hygienic items. With each kit costing only a few dollars to assemble, they make for a great service project for parish youth programs.

“The Syrian Civil War has produced one of the greatest humanitarian crises of our lifetimes and has put the future of Christianity in the Middle East in grave danger," said parishioner Adam Priestly, the coordinator of this effort. “Though radical terrorist organizations seek to push Christianity out of Syria, Iraq, and the rest of the region forever ... thousands of Christians wish to stay and rebuild their homes, churches, and communities, many of which date back to the earliest days of the Church! To do this, our Orthodox Brothers and Sisters need our help during this tragic time. Learn more about how you or your parish can help IOCC and the Antiochian Orthodox Church preserve Christianity in the Middle East.”